Last year we posted some reflections on the Bob Dylan song ‘In the Garden‘ as a point of departure for those who may be looking for an entry into the Triduum beginning on Holy Thursday. (The post is reprised below.) Late last year Dylan’s record label released ‘Trouble No More – The Bootleg Series Vol. 13 / 1979-1981‘ a multi-CD set of live concert and unreleased studio recordings from this period. A list of some of the song titles, besides ‘In the Garden‘, give a sense of the intensity and devotion expressed in these performances:

Gotta Serve Somebody, I Believe in You, When You Gonna Wake Up?, When He Returns, Gonna Change My Way of Thinking, Solid Rock, What Can I Do for You?, Saved, Ain’t Gonna Go to Hell for Anybody, Ain’t No Man Righteous No Not One, Saving Grace, Blessed Is the Name,  Every Grain of Sand, Jesus Is the One, Thief on the Cross, Yonder Comes Sin.

Surprisingly, many of the secular press reviews of this set were positive, even laudatory saying these songs were some of Dylan’s best work. There are Amazon reviews that claim these songs provided an opening for a new or recovered faith in Christ for the listeners. A short essay by a well known self-professed atheist included with the materials in the deluxe boxed set makes clear that his ears were opened to hear the message contained in these songs for the first time. No suggestion is being made that these songs reflect the fullness of Christian faith found in the sacraments. However, they are at least an expression of what St. Paul wrote of in Romans 10 that “…faith comes by hearing, and hearing by the word of God.” 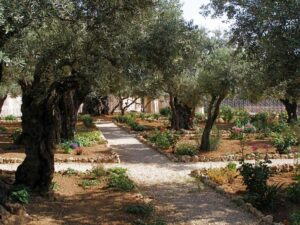 On Holy Thursday in the Mass of the Lord’s Supper, we commemorate the last Passover meal the disciples shared with Jesus, their Teacher and Master. Afterward, the whole party retired to the garden of Gethsemane on the Mount of Olives. There, while the disciples slept, Jesus experienced an agony unknown and unknowable to mere men. In 1980 Bob Dylan wrote a song entitled “In the Garden” that begins:

In a filmed recording of a live concert performance in the early ’80s Mr. Dylan is heard to introduce this song by asking the Australian audience if they have any heros, suggesting the names of famous Aussies to which the crowd responds. He follows up by saying he doesn’t care much for any of the ones he mentioned, but that he does indeed have a hero and will sing a song about his hero – launching into a rocking version of “In the Garden”.

More recently Mr. Dylan has been exploring the ‘Great American Songbook’ recording songs by George Gershwin, Cole Porter and Irving Berlin among others. In a recent interview exploring his long and varied songwriting career Dylan was asked if he thought there were any of his songs that did not receive the attention they deserved. He named two, one of which was “In the Garden”.
The verses of ‘In the Garden’ are comprised of a series of questions, like the one quoted above. Anyone familiar with the Biblical stories from which this song was taken will sense the ambiguity and uncertainty involved in attempting to answer them. Jesus’ foremost disciple, Simon Peter, had in earlier days declared that he knew or believed Jesus to be the Messiah, the son of the Living God. On this night, however, he abandoned his Lord in the garden and denied him three times in the high priest’s courtyard shouting with curses, “I do not know the man!”. We ask ourselves, ‘Did Peter really know Jesus was the Lord?’. I ask this question of myself even I as tap out the words, knowing of my own betrayals.

As we traverse this Triduum recalling the events leading into the Paschal Mystery of Easter Sunday it would be a profitable exercise to reflect on the questions posed ‘In the Garden’.
The final verse ends with the repeated question:

A blessed Easter to all,
Randy Coleman-Riese