The oil for extreme unction must be blessed
On Maundy Thursday, so the rule has ruled,
And by the bishop of the diocese.
Does that revolt you? If so, you are free
To squat beneath the deadly manchineel,
That tree of caustic drops and fierce aspersion,
And fancy that you have escaped from mercy.
Things must be done in one way or another 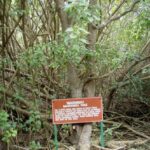 You might be tempted to eat the fruit. Do not eat the fruit. You might want to rest your hand on the trunk, or touch a branch.  Do not touch the tree trunk or any branches. Do not stand under or even near the tree for any length of time whatsoever. Do not touch your eyes while near the tree. Do not pick up any of the ominously shiny, tropic-green leaves. If you want to slowly but firmly back away from this tree, you would not find any argument from any botanist who has studied it. . . . This is the manchineel, known sometimes as the beach apple, or more accurately in Spanish-speaking countries as la manzanilla de la muerte, which translates to “the little apple of death,” or as arbol de la muerte, “tree of death.”

This warning is obviously based on bitter experience over a long period of time. It comes not only as a warning but as a gift to those to whom the manchineel tree looks perfectly appealing and who don’t suspect just how deadly the tree actually is. This is how a living tradition operates. Long experience provides each new generation with warnings it would have to learn the hard way all over again. This is especially helpful when behavior or principles of action that might seem unproblematic to one generation produce dire consequences for subsequent generations. Those who do not wish to learn the hard way about “the little apple of death” will be grateful for the tradition that warns them, and they will, in turn, make it their business to warn those who come after them.
Alas, we fallen creatures inhabit a world where multiple species of “the little apple of death” are found, each as seductive to the unsuspecting. But those who live in a self-consciously progressive age learn in a thousand little ways that traditions constrain our freedom, and those who are bold enough to strike out on their own, ignoring the warnings of their ancestors and predecessors, are valorized for doing so.
It has been over 50 years since Pope Paul VI’s Humanae Vitae, we are now in a position to judge the accuracy of its warnings about the consequences of the widespread acceptance of artificial means of birth control. The encyclical was widely mocked as hopelessly out of date, the fears of an aging celibate about matters on which he lacked the experience to “pontificate.” That he was drawing on millennia of experience by the oldest institution in history seemed to many all the more reason to ignore his warnings:  that easy access to artificial contraception would lead to a breakdown in sexual morality and undermine the stability of the institution of marriage, to casual sex, abortion and the hardness of heart required to imagine it to be morally acceptable, and not least to the demographic winter which will ravage our civilization and drastically compromise the cultures our children and grandchildren will inhabit.
Who would have thought a tree as lovely as the manchineel or something as seemingly innocuous as artificial forms of contraception would be so fraught with dire consequences? Almost no one knew based solely on his or her experience, but the accumulated experience and wisdom of our forebears very often knows such things. The chief reason we need such a tradition is because some of the mistakes we are likely to otherwise make are not only virtually irreversible but their terrible consequences will fall on our children and grandchildren, whose welfare largely depends on how we conduct ourselves, personally and culturally.