Roe v. Wade: The Tragedy of Our Age

January is the month in which we remember the 1973 United State Supreme Court’s decision in Roe v. Wade. This weekend there are marches around the country by those who believe that court ruling was a tragedy. Significantly, the promoters and organizers of the recent Women’s March on Washington refused to allow any pro-life group to participate. (In my on going attempt to incorporate Gil Bailie’s older blog posts into our new website I offer the following):

All those responsible for leading this young woman to this act of shamelessness have a great deal to answer for. 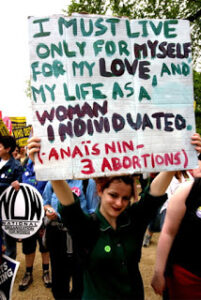 Nin, who found Guiler sexually unsatisfactory, did not return his loyalty; after their 1924 removal from New York to Paris, she began a lifelong series of sexual derelictions, flirting shamelessly at Hugo’s business parties . . . coupling with her father . . . sleeping (or so she claimed) with her brother Thorvald, putting moves on her brother Joaquín’s spiritual counselor and seducing most of her psychoanalysts (including an infatuated Otto Rank…)”

In 1931 when Nin met Henry Miller, whom she adopted as lover and disciple. Bawer again:

Impregnated by either Henry or Hugo, she took medication to induce an abortion, had a still-born girl and made diary entries that reveal a chilling inhumanity. (“Here,” she said when Miller visited her in the hospital and announced his forthcoming book, “is a birth which is of greater interest to me.”

In the 1960s, everyone was avidly reading Anaïs Nin. Among the budding feminists of the time, her words were holy writ. In many ways, Nin was the mother (if the metaphor can be forgiven here) of the radical feminists that were soon to emerge, and under whose influence countless young women, like the one pictured above, were catechized and robbed of both their feminity and their dignity.