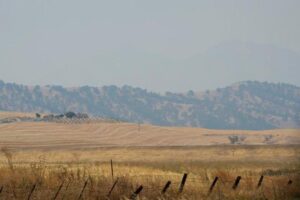 Here in California it looks like we are in for another difficult and dangerous fire season. The skies are again hazy with the smoke of numerous not too distant blazes. As we pray for those who fight the fires and work to save lives and homes threatened by them, we remain grateful for our families, homes and communities and the opportunity to continue the work to which we have been called. Dependent as we are on the kindness and generosity of our friends and supporters, we understand that every gift ultimately is a gift of grace from the source of all good gifts.
Below you will find a link to a complimentary downloadable MP3 audio file of Part 4 of Gil Bailie’s Reflections on Shakespeare’s King Lear. We are offering this as a gift to everyone who may visit our website this month. Click on the link below to download this free MP3 from our store by using the coupon code ‘summer’. (If this is unfamiliar to you please take a look at a short ‘how to do it’ video HERE.)

Gil’s ‘Notes in the Margins’

You might be tempted to eat the fruit. Do not eat the fruit. You might want to rest your hand on the trunk, or touch a branch.  Do not touch the tree trunk or any branches. Do not stand under or even near the tree for any length of time whatsoever. Do not touch your eyes while near the tree. Do not pick up any of the ominously shiny, tropic-green leaves. If you want to slowly but firmly back away from this tree, you would not find any argument from any botanist who has studied it. . . . This is the manchineel, known sometimes as the beach apple, or more accurately in Spanish-speaking countries as la manzanilla de la muerte, which translates to “the little apple of death,” or as arbol de la muerte, “tree of death.”[1]

This warning is obviously based on bitter experience over a long period of time. It comes not only as a warning but as a gift to those to whom the manchineel tree looks perfectly appealing and who don’t suspect just how deadly the tree actually is. This is how a living tradition operates. Long experience provides each new generation with warnings it would have to learn the hard way all over again. This is especially helpful when behavior or principles of action that might seem unproblematic to one generation produce dire consequences for subsequent generations. Those who do not wish to learn the hard way about “the little apple of death” will be grateful for the tradition that warns them, and they will, in turn, make it their business to warn those who come after them.

Alas, we fallen creatures inhabit a world where multiple species of “the little apple of death” are found, each as seductive to the unsuspecting. But those who live in a self-consciously progressive age learn in a thousand little ways that traditions constrain our freedom, and those who are bold enough to strike out on their own, ignoring the warnings of their ancestors and predecessors, are valorized for doing so.
This being the 50th anniversary of the Pope Paul VI’s Humanae Vitae, we are now in a position to judge the accuracy of its warnings about the consequences of the widespread acceptance of artificial means of birth control. The encyclical was widely mocked as hopelessly out of date, the fears of an aging celibate about matters on which he lacked the experience to “pontificate.” That he was drawing on millennia of experience by the oldest institution in history seemed to many all the more reason to ignore his warnings:  that easy access to artificial contraception would lead to a breakdown in sexual morality and undermine the stability of the institution of marriage, to casual sex, abortion and the hardness of heart required to imagine it to be morally acceptable, and not least to the demographic winter which will ravage our civilization and drastically compromise the cultures our children and grandchildren will inhabit.

Who would have thought a tree as lovely as the manchineel or something as seemingly innocuous as artificial forms of contraception would be so fraught with dire consequences? Almost no one knew based solely on his or her experience, but the accumulated experience and wisdom of our forbearers very often knows such things. The chief reason we need such a tradition is because some of the mistakes we are likely to otherwise make are not only virtually irreversible but their terrible consequences will fall on our children and grandchildren, whose welfare largely depends on how we conduct ourselves, personally and culturally. Which brings me to one of my favorite poems by one of my favorite poets.

The Rule by Richard Wilbur:

The oil for extreme unction must be blessed
On Maundy Thursday, so the rule has ruled,
And by the bishop of the diocese.
Does that revolt you? If so, you are free
To squat beneath the deadly manchineel,
That tree of caustic drops and fierce aspersion,
And fancy that you have escaped from mercy.
Things must be done in one way or another

Sincerely yours,
Gil Bailie
[1] Dan Nosowitz, “Do Not Eat, Touch, or Even Inhale the Air Around the Manchineel Tree,” Atlas Obscura, May 19, 2016.

Randy’s Executive Director’s Report:
While Gil continues working on his writing projects I have been steadily progressing on our initiative to make Gil Bailie’s archival audio materials available on Amazon and Audible. Currently we have six titles on Amazon as CD audio albums and three on Audible as downloadable/streaming audio books. The content of the audio materials being offered on Amazon & Audible is the same as products we offer on our webstore. However we have added new introductions and ending credits that they require. In addition, Audible has specific audio quality standards that necessitate further audio editing for materials offered through that platform. The price of the Amazon CD versions is the same as on the Cornerstone Forum webstore, although the shipping costs vary from our store’s flat rate shipping. Audible has its own pricing formula. Additionally, the packaging of the CDs has been made more uniform to help identify Cornerstone Forum products.

We hope many more people than currently visit our lowly website will have he opportunity sample our audio offerings on the giant global marketplace that Amazon and Audible provide. Another factor in our consideration is that the demise of the audio compact disc (CD) has been repeatedly reported over the past number of years. The latest harbinger of its death being the news that the retailer Best Buy recently stopped selling music CDs in their stores. While we don’t think we are in the same category as pop music, we realize that new listeners to Gil Bailie’s talks who are under the age of 40 will likely be more familiar with listening to streamed audio materials on their mobile phones than on a CD.

We will continue to offer CD versions of Gil’s talks as long as we can. Our 7 year old in-house production equipment is working well for our current low volume needs. However, if demand were to increase significantly due to sales on Amazon (not at all a bad prospect), or an equipment failure (a decidedly bad prospect) we would be faced with the challenge of how to fulfill the demand. Outsourcing CD production is possible. But for a low volume enterprise like ours, costs would increase substantially.

So, we trust that our audio initiative will bear fruit for a wider audience and a new generation of listeners in whatever media format it is offered. We encourage you to share any materials you receive from the Cornerstone Forum with friends who may appreciate them. And if you purchase any of our audio materials from either Amazon or Audible please leave a review as it helps those who are considering listening to Gil’s talks.

Thank you, again, for your interest in our work.
Blessings,
Randy Coleman-Riese – Executive Director