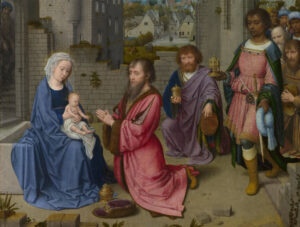 O Rex géntium
et desiderátus eárum,
lapísque anguláris,
qui facis útraque unum:
veni et salva hóminem,
quem de limo formásti.
“O King of the peoples,
whom they long for,
the cornerstone,
who make the two into one:
come and save man,
whom you made from clay.”

“He is, then, like the stone at the corner of two walls, or (by an ancient and praiseworthy conflation) the keystone which, merely by being there, stops the two sides of an arch from collapsing inwards.” (from the Universalis commentary for 12/22/22)

“And Mary said: My soul proclaims the greatness of the Lord, my spirit rejoices in God my Savior.”

“The Lord has exalted me by a gift so great, so unheard of, that language is useless to describe it; and the depths of love in my heart can scarcely grasp it. I offer then all the powers of my soul in praise and thanksgiving. As I contemplate his greatness, which knows no limits, I joyfully surrender my whole life, my senses, my judgement, for my spirit rejoices in the eternal Godhead of that Jesus, that Savior, whom I have conceived in this world of time.” (Venerable Bede on St. Luke’s Gospel)

“The angel Gabriel had announced the news of something that was as yet hidden and so, to buttress the Virgin Mary’s faith by means of a real example, he told her also that an old and sterile woman had conceived, showing that everything that God willed was possible to God.   When Mary heard this she did not disbelieve the prophecy, she was not uncertain of the message, she did not doubt the example: but happy because of the promise that had been given, eager to fulfil her duty as a cousin, hurried by her joy, she went up into the hill country.

Where could she hurry to except to the hills, filled with God as she was? The grace of the Holy Spirit does not admit of delays. And Mary’s arrival and the presence of her Son quickly show their effects: As soon as Elizabeth heard Mary’s greeting her child leapt in her womb and she was filled with the Holy Spirit.

See the careful distinction in the choice of words. Elizabeth was the first to hear the voice but her son John was the first to feel the effects of grace. She heard as one hears in the natural course of things; he leapt because of the mystery that was there. She sensed the coming of Mary, he the coming of the Lord — the woman knew the woman, the child knew the child. The women speak of grace while inside them grace works on their babies. And by a double miracle the women prophesy under the inspiration of their unborn children.” (St. Ambrose on St. Luke’s Gospel)

May we know the child who is the cornerstone; whose annunciation led Mary to hurry in her joy up to the hills; whose presence made John leap in Elizabeth’s womb; whose advent and epiphany we daily anticipate!

A Blessed Christmas to everyone!